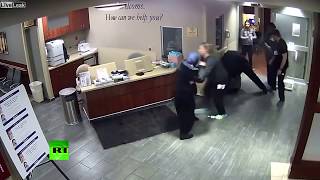 Situational Awareness - You're doing it wrong

Protective Orders and the Workplace

Data from the recently released Secret Service Report on mass attacks is striking; 147 people killed and nearly 700 injured at different locations and venues across the country in the last year. As a society, we know that there is problem, but this report, from a single year, helps highlight a pathway towards intervention before the next attack. People don't just snap and this report is a stark reminder

100 percent of the attackers were impacted by one or more significant stressor in the last five years, 100 PERCENT. The attackers dealt with money problems, family issues, disappointing work performance and negative interactions with Law Enforcement. Almost 80 percent of the attackers had raised concerns in others about their behavior before carrying out their attacks; people were worried about them. And a very high percentage, over 80 percent, displayed signs of Aggressive Narcissism; in other words they were "super jerks!" Is that an overly simplistic description of a serious personality disorder?Yes it is. But that's really the point.

Just like the average person is very comfortable deciding if a child who is not feeling well needs a nap vs. a trip to the doctor. You do not need an advanced degree to know that somebody is "off." You do not need (nor should you try) to diagnose a person that is displaying concerning behavior. You simply need to get your concerns to somebody who can help understand the situation. We are beyond "see something, say something," we have to "do something!" We have to share our concerns. And if the person you take your concerns to doesn't understand, appreciate or take action, go to somebody else!

So what are we missing? We are missing the opportunity to intervene. Even though the Secret Service report highlights several common themes and areas of concerns, it is not a checklist. There are hundreds, if not millions of people that go through difficult life struggles who don't go on to commit acts of violence. The difference is that you may only see one item of concern that is really part of a developing pattern, and this is why its so important for you to share your concerns. I know its becoming increasingly frustrating to hear the long lists of missed, overlooked or even ignored warning signs after a shooting. As a community we have to do better. When we are concerned, we have to do something.

About the author: Mr. Alvarez is the founder of Alvarez Associates, a workplace threat management firm specializing in workplace violence prevention. Having been both a security director for a major national critical infrastructure and a city police officer, he has built over 25 years of experience. He understands the challenges organizations and communities face addressing the threat of violence. Hector has the honor of working with organizations, both corporate and community based to build safer communities through keynote speeches, workshops, security assessments, trainings and behavioral threat assessments. www.wvpexperts.com